Sixty years ago, on Sept. 26, 1960, a debate between major party presidential candidates was shown on television for the first time. The presidential hopefuls, John F. Kennedy, a Democratic senator from Massachusetts, and Richard M. Nixon, the vice presid... 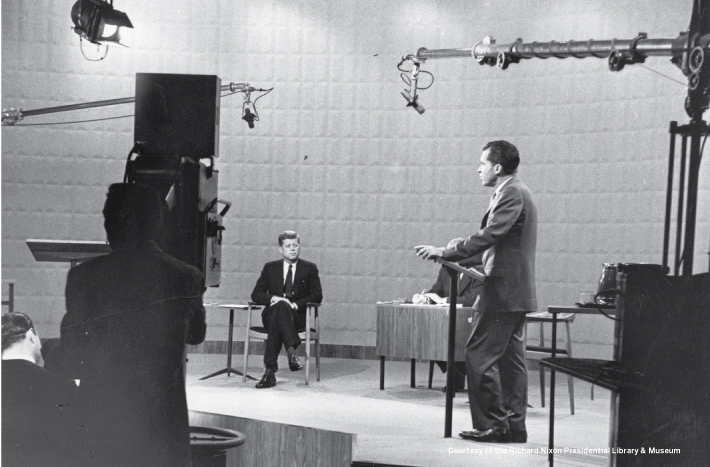 Sixty years ago, on Sept. 26, 1960, a debate between major party presidential candidates was shown on television for the first time. The presidential hopefuls, John F. Kennedy, a Democratic senator from Massachusetts, and Richard M. Nixon, the vice president of the United States, met in a Chicago studio to discuss U.S. domestic matters.

There were three other debates in October. In the final debate Oct. 21, the candidates met to discuss foreign affairs. The election was held Nov. 8 and was one of the closest in history, with Kennedy winning 49.7% of the popular vote to defeat Nixon (49.6%) by a hair.

The first presidential debates required an act of Congress.

The Communications Act of 1934 required that American broadcasters offer all candidates for public office — not just those from the major parties — equal time on air. In order to legally permit the 1960 presidential debates to be limited to Kennedy and Nixon, Congress temporarily suspended that provision of the law.

A 1975 revision by the Federal Communications Commission allowed presidential debates between the major party nominees to be staged without special acts of Congress.

Even though there were enormous audiences for the Kennedy-Nixon encounters, 16 years would go by before the next series of presidential debates. President Lyndon Johnson refused to debate in 1964, while Nixon did the same in 1968 and 1972.

Frank Gannon, chief editor of Nixon’s memoirs, had this to say about the first debate: “So the campaign wasn’t proceeding unsuccessfully from Richard Nixon’s point of view, but, as we now know, the die had been cast on Sept. 26 when people came away from that first debate admiring JFK, and thinking (even those who still had some reservations in this regard) that he had sufficient stature to become POTUS.

“Conversely, the impression of Nixon, which he was never able to outlive, was that he lacked energy and imagination. He was rooted (which, for many, meant mired) in the past, defending Ike instead of following his own vision. He knew all the right words and jargon (he used the word ‘programs’ 12 times in his opening statement at the first debate) but, unlike the charismatic JFK, he failed to excite or inspire.”

Earlier in the year, Nixon described his basic approach to the debate to his biographer Earl Mazo. He said:

“I think I am a pretty fair judge of political television. … Above everything else, a candidate to be effective on television must know what he is talking about, believe deeply in the rightness of his cause and speak naturally and sincerely just as if he were carrying on a conversation with two or three people in a typical American home which he had happened to visit.”

In the third presidential debate of 1960, the candidates were not in the same room. They were separated by nearly 3,000 miles.

Both men appeared behind podiums in similar-looking television studios, Kennedy in New York City and Nixon in Hollywood. The moderator and three panelists sat in a third television studio. There was no handshake at the end of the encounter.

According to the U.S. Senate’s archives, the first televised presidential debate was not the Nixon-Kennedy encounter of 1960 but featured two women, Eleanor Roosevelt and Margaret Chase Smith, on “Face the Nation” in Washington, D.C., on Nov. 4, 1956.

This debate did not feature the candidates. The 1956 Democratic candidate, Adlai Stevenson, challenged incumbent Republican President Dwight Eisenhower — but those two men did not appear in the debate. Instead two surrogates debated the issues on network television: for the Democrats, former first lady and party icon Roosevelt; for the Republicans, the senior senator from Maine, Chase Smith.

The forum was the CBS program “Face the Nation,” in its second season, and this was the first time a woman appeared on the program.

By 1956 Chase Smith was in her second term in the Senate and had known Eleanor Roosevelt for two decades. They both published a daily newspaper column. By 1956 both women routinely appeared on lists of America’s most admired women.

As the 1956 campaign began, Eleanor Roosevelt emerged as Stevenson’s strongest advocate and was known as the “Heroine of the Convention.”

Chase Smith also was a seasoned politician by this time. She gained national attention in 1950 when she took on Joe McCarthy and became the first woman to serve on the Armed Services Committee in 1953.

The event took place two days before the election and focused almost entirely on issues of foreign policy.

Most watched debates in millions of viewers