Former prime minister refused for over a year to meet with leaders he viewed as illegitimate, instead taking updates directly from military secretary Avi Gil

Breaking NewsFor the first time since being ousted from the premiership, opposition leader Benjamin Netanyahu is expected to receive a security briefing from Prime Minister Yair Lapid, ending his year-long boycott of the standard procedure.

Amid the outbreak of violence in Gaza, Lapid on Saturday once again invited the former prime minister to a meeting with military secretary Avi Gil “as required by law,” and Netanyahu accepted.

The prime minister’s office announced later: “The exact time will be determined between the bureaus.”

Friday saw the Israel Defense Forces launch a major military operation against the Palestinian Islamic Jihad terror group in Gaza in response to what officials said was an ongoing “concrete” threat by PIJ to target Israeli civilians and soldiers near the border.

While the law dictates that the opposition leader will receive security updates from the prime minister — a procedure that has been followed for years — Netanyahu refused to comply with the protocol over the past year, as he regularly railed against the legitimacy of the current coalition government.

Get The Times of Israel's Daily Edition by email and never miss our top stories By signing up, you agree to the terms

Netanyahu on Friday tweeted his support for the military in its efforts against Gaza terrorists, though he made no mention of Israel’s political leaders. 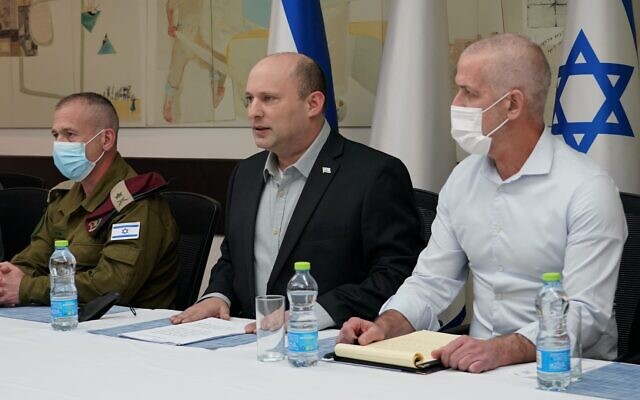 Israeli leaders have said the operation was necessary after the PIJ refused to back down from its intentions to carry out attacks on the Gaza border.

Saturday saw a street in Ashkelon, a home in Sderot and a factory in a town close to the border hit by rockets, without injuries. Three people, including two soldiers, were also lightly hurt in a separate mortar bombardment near a town in the Eshkol Regional Council.

The Barzilai Medical Center in Ashkelon said it had treated 20 people so far amid the rocket attacks on southern Israel, including 15 people who were lightly hurt after falling over while running to bomb shelters, and a further five people for anxiety.

The latest data as of Saturday afternoon from the IDF put the number of rockets launched toward Israel by the PIJ at 361. Of them, 70 fell short in the Gaza Strip.

Prime Minister Yair Lapid spoke with leaders of southern communities on Saturday afternoon, updating them on the operation and emphasizing the need for residents to adhere to the instructions of the IDF Home Front Command.

Later on Saturday, the IDF said it had struck several more PIJ sites, as well as a terror cell en route to launch mortars at towns in southern Israel.

The IDF said there were currently “no negotiations underway” to bring an end to the violence.