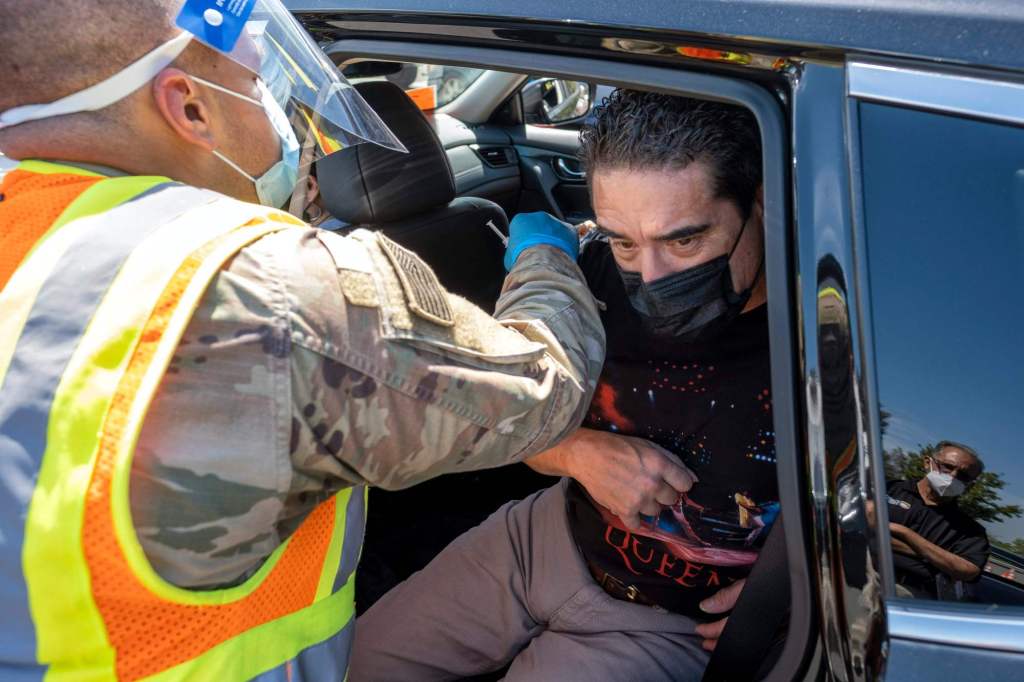 Is California spiking the football before the game is truly over?

Gov. Gavin Newsom’s declaration that the coronavirus outbreak could largely be over in his state by June sent local leaders, public health experts, doctors and business owners scrambling for thoughtful answers to that question.

Some questioned the wisdom of of the state’s sudden shift into the recovery fast lane, given the significant gains still needed to attain vaccination goals and the gradually slowing declines in caseload growth. Others, however, were confident that this was the appropriate decision for a state eager to break free of the fiercely debated coronavirus restrictions and the economic turmoil triggered by a bitter year of pandemic.

The governor spoke of  “resuming everyday activities,” wide-open businesses and “common-sense risk-reduction measures.” In response, Ferrer raised the specter of the “double mutant,” potential super-spreaders and the enduring sting of winter’s deadly surge.

“I don’t think anybody knows exactly what reopening looks like on June 15, except that with a lot more people vaccinated many restrictions on some of our activities will no longer be necessary,” Ferrer said.

Ferrer’s words were not stripped of optimism, however. Ferrer said L.A. County would follow the state’s guidelines, including the continuation of a mask mandate and social distancing, especially in schools and other settings with children. And she said she sincerely hopes the statistics — and the vaccine supply — will boost the governor’s buoyant vision.

“I think it’s completely possible if we move forward with this collective will to take care of each other from now until the time we get more and more people vaccinated,” Ferrer said Wednesday. “That’s what gives us that extra level of protection that allows us to get beyond the blueprint.”

In Orange County, experts and officials aligned optimistically — but with their own caveats.

“I do believe that we’ll be in a much better place June 15 than we are even today,” said UC Irvine epidemiologist Andrew Noymer.

But eight weeks still feels like a long ways away to the Irvine professor.

“These things can kind of turn around,” Noymer said, noting that Michigan has seen an unnerving uptick in cases in the past month.

Dr. Roger Lewis, who leads the team at the L.A. County Department of Health Services that forecasts hospitalization demand based on coronavirus case rates, said that local modelling shows June 15 as a reasonable target for complete reopening given what they are seeing in the local models.

Key numbers have now returned to levels last seen in March 2020 before the first surge in patients in April.

Still, Ferrer cautioned that rates of declines have levelled off significantly. And she worried that more gatherings in the days ahead could kickstart increases in those pivotal categories.

At the top of mind for Lewis and many others are the growing number of variants, including a “double mutant” recently found by Stanford University researchers that could be especially virulent.

“While we have essentially informally good news locally, we would be foolish not to be paying very close attention to what’s happening in Michigan and other states,” Lewis said.

National public health officials have been watching increases in caseloads in Florida, New Jersey and Pennsylvania, too.

“We don’t live in a bubble here in L.A. County,” Ferrer said. “In order for us to hold on to the gains we’ve made, we have to be more diligent not less diligent.”

Statewide, more than 20 million vaccine doses have now been administered, at least 4 million of them in the state’s hardest-hit communities based on the Healthy Places Index.

For Dr. Lawrence Sher, an allergist-immunologist who leads the Palos Verdes Medical Group, said assessing the vaccine stats make him believe June 15 could be premature.

But he added: “Until we get children and adolescents vaccinated as well, we still can have problems down the road. We are still being a little more aggressive than most of us would like them to be.”

So far, the Pfizer vaccine is approved for residents 16 and older. Both the Moderna and Johnson & Johnson require recipients be at least 18. Drug makers, however, are currently in trials with children as young as six months old.

Sher expects it will take another few months for children 12 and older to be approved. Children younger may require six months or more, he said.

“They (drug companies) are all trying to go younger and younger,” Sher said. “They just have to get the approval and inoculate as many people as possible to prevent spread and mutations of the variants.”

The ultimate question: What constitutes herd immunity? Experts do not agree, Sher said.

Most place it anywhere from 70 to 80% vaccinated — or higher. It really depends, he said, on how effective the current vaccines prove to be at warding off variants. (A hint: So far they have fared pretty well, including against the U.K. variant, Sher said.)

Moving into the new green tier on June 15 “depends on us,” said Brandon Brown, a UC Riverside associate professor with a background in epidemiology.

“We need high vaccination rates, people practicing masking and physical distancing, we need to do better with (hard-to-reach) populations, and importantly keeping a close watch on the data to track the number of hospitalizations and cases including the new variants,” he wrote by email.

Brown worried about the summer break bringing increased travel and more people easing up on  prevention measures, some of which became habits back when caseloads were soaring.

“Masking may need to be our ‘new normal,’ even after June 15,” Brown said.

Much progress has been made in getting vaccines into the field, with about 40% of the state’s adults getting at least one dose, said Bernadette Boden-Albala, dean of UC Irvine’s School of Public Health.

But she’d like to see that number at least doubled before people go back to a pre-pandemic “normal.”

Some of the groups already eligible for the vaccine — seniors, people with underlying health conditions and public-facing workers — were highly motivated to get inoculated because they face higher risks from infection, Boden-Albala said.

Fear of death can be a powerful motivator. It generally doesn’t resonate, however, among younger residents.

“What is concerning is that we don’t really understand the behavior in terms of vaccine uptake of young people,” she said

Also: “Vaccine hesitancy is going to rear its ugly head,” she added.

Noymer and Boden-Albala both worried that the end of the state’s tier system will make it harder to fine-tune the response based on what’s happening in each county.

Eliminating state tiers throws decision-making to the counties, which could decide to keep more things closed if their numbers go in the wrong direction, Carpiano said.

“The trick is, to make that work, there needs to be more detail around what the markers will be, what to be aiming for,” he said.

Alice Kao, who owns Sender One Climbing, an indoor gym with a location near LAX airport, called the June 15 reopening date a hopeful sign.

But real recovery for business owners, jolted by the gut-punch delivered by months of restrictive health orders and the subsequent shutdowns, still seems far off.

“I celebrate that this hurdle to our business recovering will be behind us soon, but this is not the only hurdle,” Kao said. “Whether a business is able to fully recover will depend on a lot more factors than whether the government says we can. Going back to the way we were is going to take time.”

Kiran Savage-Sangwan, executive director of the California Pan Ethnic Health Network, which represents the interests of minorities, said their biggest concern was maintaining a clear focus on equity as the vaccine is rolled out.

While progress has been made on the unsettling gaps detected in the initial months, revealing that communities of color were bearing an inequitable burden, Savage-Sangwan said more needs to be done to reach those hardest him.

“The larger question is who has access to the vaccine supply and is it equitably distributed,” she said.

“The state has made great strides in that area but when we look at the data it’s clear we have to do more.”

Sign up for The Localist, our daily email newsletter with handpicked stories relevant to where you live. Subscribe here.

Watch the pink moon light up in the night sky in April. breaking news SonDakika-Haberleri.Net